As a part of our ongoing translator interview series, we’re excited to introduce you to one of our most cherished translators – Silvia Brandon-Pérez! Silvia comes with years of translation experience in a number of languages. She is a native speaker of English and Spanish with complete fluency in French and Italian. Read on as Silvia shares life lessons, career tips and some fun experiences she’s had along the way. 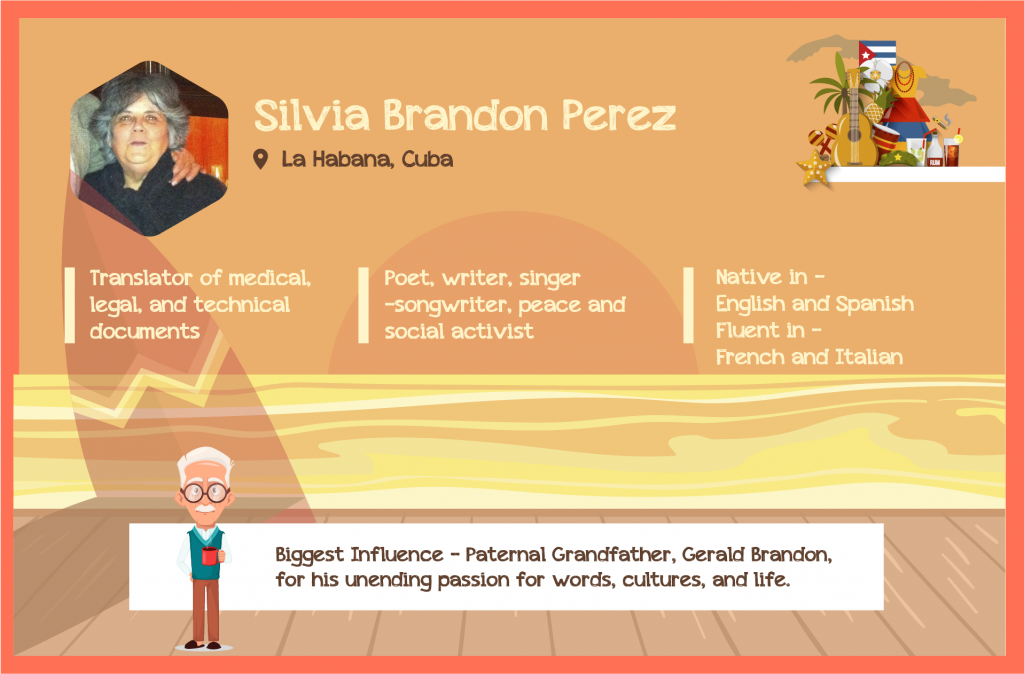 1:Hi Silvia, thank you for participating in this interview series. Could you start by telling us about yourself and where you’re from?

You’re most welcome. I always enjoy conversing with TBH. I was born in La Habana, Cuba, and currently live in Northern California in the U.S. I have lived in several Caribbean countries, including the Dominican Republic and Puerto Rico.

What an interesting background! Could you tell us some more about your interests and how you’ve passed on your love for languages to the next generation?

I was born into a multilingual family, and in particular, my grandfather spoke 7 or 8 languages and was the official translator and interpreter for the Swiss Embassy in La Habana. He had a passion for languages, social justice, and human rights, all of which he passed on to me.

I am a poet, writer, and singer-songwriter and hope to see two of my books hit the streets before winter. I am also a peace and social activist in several languages. In recent times I’ve studied theology and been ordained as a priest in an international prophetic movement for the ordination of women in the Catholic Church.

I have five children who all were taught to speak and read Spanish and French. The last three, whose father is Italian, also learned to speak Italian. I am now learning Vietnamese and Filipino because two of my children have gotten married into those cultures. I am also trying to find a teacher in Farsi because of my love of the poet Rumi.

2:Please tell us about your educational background and work experience.

Growing up in a country that valued culture and languages, and coming to live in one that does not (the “English only” anomaly), it seems to me I have been a translator since a very early age. There was always someone who spoke in a language the officials or teachers did not understand. I went to university in Puerto Rico which is a bilingual country.

My classes were taught and read in both Spanish and English. I was admitted to a very small Honors program which included French and German, taught in a class of no more than six students. I also took a semester in Sanskrit.

Those are a lot of languages! Could you tell us how and why you became a translator?

In 1973 I read law at Seton Hall University School of Law and became an attorney (Juris Doctor degree) in 1976. From the start, my clientele was multilingual, and I insisted our response had to be the same. Initially, through my practice as an attorney/lawyer, I became interested in many subjects such as medical procedures. Also, I managed a construction company for my second husband, so I added construction terminology to my “repertoire.”

I became a full-time translator and interpreter in 2003. Some of my interpretation work is for torture survivors and international organisations such as Solidarités, which does UN work.

3:What would you have done differently at the start of your career if you knew then, what you know now?

I don’t think I would have done anything differently… Language is a portal into another culture, how they do things, how they think of things.

4:How has being multilingual helped you? Is there one language you prefer thinking in over another language?

Being multilingual is a joy. It helps with musical and mathematical ability (or perhaps those help with language ability, I am not sure) and makes life a lot more interesting and colourful. It provides insight into worlds most people never visit.

5:What does a normal day in your life look like?

It starts very early and ends very late. In addition to doing translation and interpreting work, I read and meditate daily, attend protests, help immigrants and people who are being abused by the system. I cook almost every day and share food with the homeless.

6:Who are your biggest influences and why?

My paternal grandfather, Gerald Brandon, for his unending passion for words and cultures and life. He was a writer and journalist. 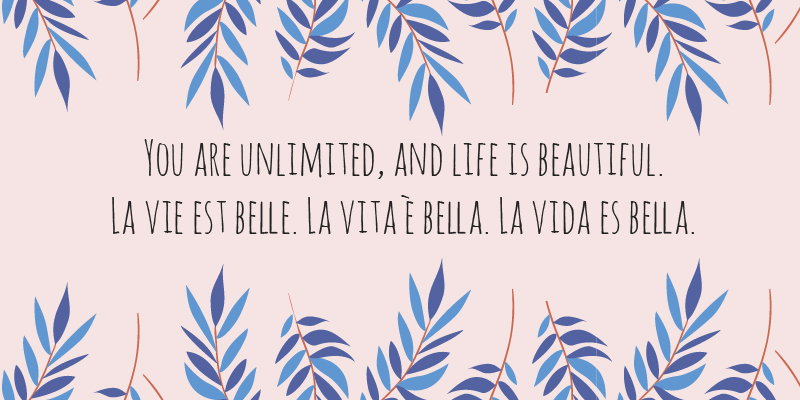 From my beloved grandfather: Look, listen, open your eyes. Never lose your curious child. There is always a perfect way to express exactly what you want to say.

8:How do you want to be remembered?

As a fighter for beautiful and eternal things, our planet, the Earth, people who are marginalised and abused. As a speaker of truth, despite the consequences.

9:As a translator, what surprising lessons have you learned along the way?

That translation is the key to people’s lives, experiences, and being. Recently I was driven home by a man from Algiers, who kept lapsing into French during our long trip. I told him to go ahead and speak French if he so desired. We wound up having a wonderful conversation and had no time to realise we had been stuck in traffic for more than an hour. He drove me up to my very doorstep and helped me with my luggage… He was kind in three languages.

10:Tell us about a funny translation incident that you’ve come across.

I hosted two boys from the Boys Choir of the City of Paris, and one of them would not bathe. I gave him a bar of soap and told him to go bathe! The problem is that in Spanish, soap is jabón, and ham is jamón, while in French, it’s savon and jambon. I actually told him to take the ham (le jambon) and bathe! From then on, I became known as Madame le Jambon (Madam the ham).

Of all the interviews we’ve done so far, this incident is by far the funniest!

11:What has been the most rewarding part of working with us? Could you please describe your journey?

I have been working with Translate By Humans, for Spanish translations and others, for a number of years. In some cases, an assignment with TBH has led to learning something new, as with sous vide cooking, which I knew nothing about until I translated a blog and then had to buy the equipment to try it out!

We enjoy working with you, admire your zest for life and are constantly amazed by your multiple talents!

12:What advice would you give to an aspiring translator?

Great Advice, Silvia! Thank you so much for sharing so many interesting details about your life and career.

I enjoyed every minute of it!