The Journey that Led to Multilingual Customer Service

John DiJulius forgot his laptop charger in his room at the Ritz-Carlton hotel in Sarasota as he rushed to get to the airport. Upon realising it, he decided to call the hotel. The next day, before he got to his office, he received an air package from the Ritz-Carlton containing the charger and a note saying – “Sir, I wanted to make sure we got this to you right away. I am sure you need it, and just in case, I’ve sent you an extra charger for your laptop.”

The loss prevention clerk who sent the note had no idea then that DiJulius was, in fact, a customer experience expert and author who later narrated the incident in his now-famous book – The Customer Service Revolution.

From the invention of the telephone to call centres, from 1800 numbers to chatbots, customer service has come a long way. It needed that journey because milestones helped companies realise where they were lacking and what were the best ways forward. What’s noteworthy, however, is how the importance of regional language has increased over the years. When it comes to queries and complaints, customers still prefer to speak in what can be called their ‘heart language.’ Look closely as we make some observations about the evolution of customer service in this article. 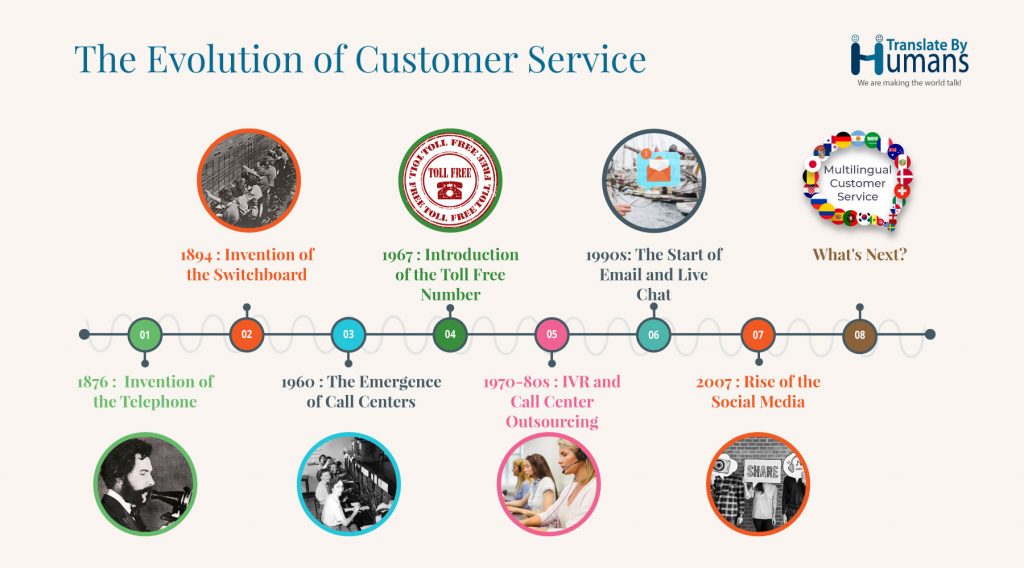 It took almost 70 years before the concept of call centres materialised not only for marketing purposes but also for hearing consumer complaints. By 1962, companies were using touch button phones in call centres to answer complaints and make sales. Soon there emerged examples of companies who based their business models on sales done on the telephone. Direct Line, founded by Peter Wood in 1985, became the first such company to sell insurance almost entirely over the telephone.

Businesses had begun to analyse consumer data through responses such as the preferred time of calling, their interests, number of people choosing plastic currency over cash, etc. This was followed by a wave of digital innovations such as IP telephone systems (the 90s), caller ID or caller line identity (CLI) on the screens of telephones and the headsets used by call centre executives to answer calls.

The Toll-free Number and Language Option

With the intention to increase convenience, the concept of the toll-free 1800 number came into being in 1967. There was a clear message that consumers did not need to pay to be heard. However, only 5% of these calls were actually free at the time, while numbers were tied to geographic areas. As a result, companies had to maintain several 1800 numbers.

In 1981, AT&T scientist Roy Weber came up with a better innovation – he connected 1800 numbers to a computer file. The computer network consulted that file for instructions about handling a call and then, through a number of procedures, got the call to the right place at the right time.

The flip side of this technology was that it stripped away a lot of personalisation since these numbers would put consumers through to an actual operator only after browsing through various automated options. Yet, in terms of localisation, this was a major step because, for the first time, customers got to choose their preferred language of communication.

Continuing with consumer analytics, the Interactive Voice Technology (IVR) IVR was introduced in the late 70s and early 80s when digitised speeches began being stored in disks. This turned out to be extremely expensive, but it led to the recording of spoken messages, processing the customer’s response and moving them through phone trees.

It can be deduced that this may have indirectly paved the way for the outsourcing of call centres in the 90s. Business process outsourcing (BPO) was the new form of call centres that proved to be more cost-effective and took customer service several notches higher. Do note, however, that call centre executives were mostly expected to know English because they were servicing customers from other countries.

It’s hard to believe that call centres have survived the rise of the internet, where people simply contact the business or make complaints through online forms. Today, our good old call centres have evolved into contact centres or support centres for client servicing. In fact, according to a Zendesk report, 54% of customers still prefer calling customer support over other media such as email or self-service portals.

Since emails were extensively used in the 90s, it was inevitable that they became an integral part of customer service too. However, most email communication, suffered from language barriers with executives not knowing local languages to answer customer queries and complaints. Live chats proved to be more efficient because customers started to chat in their own language while typing in Roman script. This allowed companies to put localisation as a priority and employ executives who knew the local language.

Live chat adoption has proven to be phenomenal for several B2B companies today. According to The Customer Service Report 2018 (by Livechatinc.com), the demand for live chats on business websites has grown by 8.29% since 2016.

While the concept of ‘customer relationship management’ had entered business terminology in the 1970s, it was only in the 1990s that CRM became an integral part of marketing and sales. Earlier, businesses used annual surveys or direct feedback from customers and relied on standalone mainframe systems to automate sales.

They continued to use spreadsheets and lists for customer data until 1986, when a customer evaluation system called ACT was introduced. This application was used to track client and prospect details in a single database that could be shared by multiple users. Developed by Swiftpage, ACT integrates with MS Word, Excel, Outlook, Gmail and Google contacts. Till today, ACT has 2.8 million users. There were several other developers, including Tom Siebel, who designed the CRM product called Seibel systems in 1993.

The CRM software was further popularised by Gartner and IBM and by 2000, CRMs began to be enriched with enterprise resource planning (ERP) functions along with shipping and marketing capabilities. SugarCRM developed the first open-source CRM system in 2004. According to the 2016 Forrester report, Infor, Microsoft, and NetSuite were among the nine most significant CRM suites from eight prominent vendors.

The Rise of Social Media

As customers become more aware and informed, businesses have to deal with a massive amount of consumer data. Chatbots have made it easier to handle queries, but they produce an enormous amount of data on a daily basis. They cannot do justice to the basic premise of customer service – addressing the various emotions of customers and ensuring satisfaction.

The Need for Multilingual Customer Service

Every business or company today has access to social media and online services. One of the best ways to tackle customer service efficiently today is to localise and speak in the language of customers.

Some facts stand out from a report:

Consumers are data-savvy. They analyse reviews and compare prices. However, in the end, they make decisions based on what they feel about a company, a product or a service. Most companies are sensitive towards localisation, but only those succeed who can speak the ‘heart language’ of customers by providing multilingual customer service. In the next article, we wish to explore exactly this. We will take you through case studies of noted brands that used regional languages consciously to win the localisation game.

6 Lessons to Learn from Bad Customer Service Stories
Tales of 6 businesses that lost customers over bad customer support. Breeze through this quick read and take notes on what not to do! 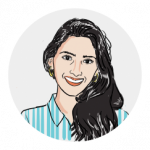 5 Industries Excelling at Multilingual Customer Service
A key component of good customer service is ensuring that its multilingual. Take at look at these 5 industries that are nailing native language support!

Introducing Auto Reply on the Translate By Humans App for Zendesk
This new feature ensures you can win at quick turnaround with the click of a button. Here's everything you need to know to know about the auto reply feature! 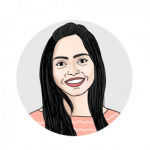