How to Choose the Right Medical Interpretation Service

Access to medical interpretation isn’t just an additional option for patients that speak a foreign language; in many countries, it is their legal right. For patients who have limited language proficiency, it becomes imperative for healthcare providers to ensure the patient’s well-being by appointing a medical interpreter.

It’s often argued that a bilingual friend or family member can help bridge the communication gap between the patient and healthcare provider. Unlike trained medical interpreters; however, most people lack the qualifications that can help them maintain accuracy, cultural sensitivity, and objectivity, especially while dealing with someone they are emotionally connected to.

Finding interpreters that ensure an unbiased and accurate representation of all information exchanges between individuals and healthcare facilities is a challenging process. Fortunately, a language service provider (LSP) specialising in interpretation services can help lessen the burden. Here’s everything you should look out for while scoping the market for the right medical interpretation service: 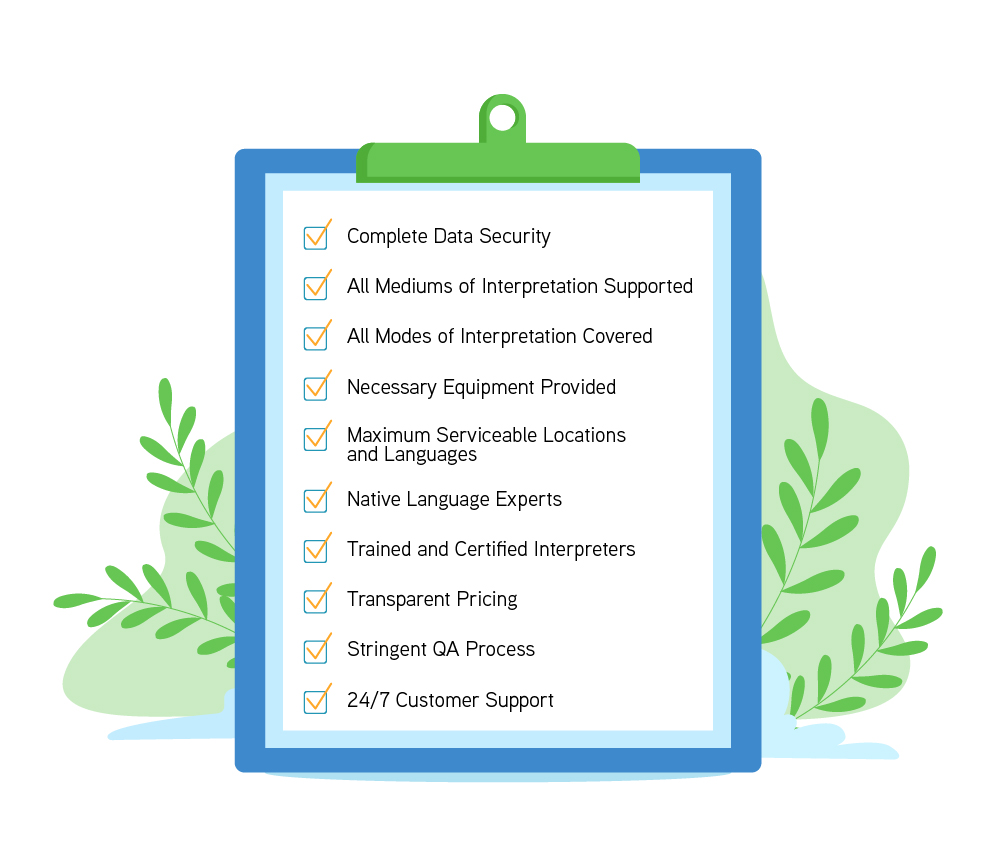 Information related to a person’s health is extremely sensitive and therefore, must always remain confidential. LSPs that go the extra mile to secure their clients’ health information will adhere to the standards set forth by governing bodies in their areas of operation. In the United States, the Health Insurance Portability and Accountability Act (HIPAA) establishes certain standards of protection while handling protected health information (PHI) in physical or electronic form. It ensures that healthcare providers and their business associates adopt the necessary safeguards to mitigate data mishandling, theft, and breach of confidentiality.

Always look for a service provider that can vouch for complete data security on behalf of their company and all their associates.

All mediums of interpretation supported

The ideal service provider should offer both types of interpretation services and help you make an appropriate choice.

All modes of interpretation supported

Certain modes, such as simultaneous interpretation, require a considerable amount of hardware for carrying out the service.

Imagine a convention with a diverse group of professionals from the medical fraternity. Here, a speech delivered in English may need to be interpreted in multiple languages in real-time. An interpreter for each target language would be seated in a soundproof booth, repeating what the speaker is saying within 30 seconds of it being said. The interpretation would be transmitted through headphones to each corresponding member of the audience that speaks the target language.

For such services, it’s essential to establish who will be responsible for the equipment required for the service. A service provider that can guarantee to meet your logistical requirements will save you a considerable amount of time and energy.

Moreover, when it comes to remote medical interpretation services, keep in mind that a consistent and fast internet connection is crucial, as is a high-quality device through which the audio and video will be transmitted. Work with your project manager to iron out concerns like a sudden loss of power or a poor connection during an interaction.

A medical emergency can occur anywhere and at any time. When you begin working with an LSP, you need to first check which languages they support and if there are any locations they cannot service. The last thing you want is to be turned down during a crisis.

With in-person interpretation, there are several factors at play. You will see a higher likelihood of success with common languages, during working hours in well-connected locations. When any of those variables change, delivering the service can become more difficult.

It’s important for you to assess your requirements and have an open conversation with potential partners, so neither party is caught off guard.

The true potential of an LSP can be measured by their network of interpreters. Choosing one that hires only native language experts should be high up on any healthcare provider’s list of requirements. This will ensure that the interpreters who are assigned to your project, can process cross-linguistic differences, understand the cultural background of the patient, and can connect with the individual on a level that most non-native speakers cannot.

Interpreters with the right accents and dialects

Every language is spoken in different regions of the world but can be distinguished by accent. For instance, Canadians pronounce French words in their unique way and hence, their is a dialect of French called Canadian French.

So, if a French interpreter from France were to interpret for a person who is Canadian, chances are that there would be gaps in communication. Moreover, in some modes of interpretation like remote simultaneous interpretation, the interpreter will have to interpret the message immediately – leaving them no room for adapting their accent or dialect to that of the listener(s).

Pricing of medical interpretation is dependent on numerous factors such as the language pair, type and mode of interpretation, time and place, etc. That being said, you should know if there are any fixed operational charges or project management fees. You should also ascertain how you will be charged – per day, per hour etc. A clear conversation that maintains transparency will help avoid billing discrepancies in the future.

Be mindful of companies that charge hidden fees or add last-minute fees for equipment rentals or other operational costs.

Unlike medical translation, it isn’t possible for a project manager to assess or review the actual work the interpreter does before it reaches you. The company should, however, screen interpreters based on their previous work, qualifications, and references before selection. Similarly, your project manager should also ask for detailed feedback once the project is complete.

An LSP with an ISO certified quality process will ensure that it upholds or exceeds the industry standards.

Lastly, around the clock, support should be an integral aspect of your partnership with a suitable LSP. As discussed earlier, emergencies can happen at any time, which means that the requirement of a medical interpreter can arise even outside of regular working hours. Being able to contact your LSP at any time of the night or day will ensure that there is never a pause in the services you provide.

Medical interpretation, when delivered right, helps save thousands of lives, boosts medical advancements, and allows patients and healthcare workers to feel connected. Take the necessary time and steps to find an appropriate service provider that meets the criteria mentioned above to provide quality medical interpretations.